The Grampians Peaks Trail has Opened 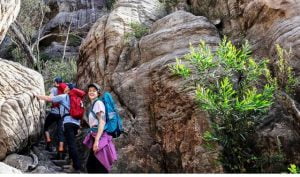 After being in the pipeline for well over 20 years, the spectacular 13-day Grampians Peaks Trail has officially opened. The trail passes through a variety of terrain in the Grampians National Park (Gariwerd) and is rated a challenging Grade 4/Grade 5. Covering 160km from Mt Zero in the north to Dunkeld in the south, it caters for self-guided walkers, groups and fully-facilitated hikes with a licensed tour operator.

Bushwalking Victoria’s Bushwalking Tracks and Conservation standing committee has been involved with this project from its early inception and advocated for the rights of all walkers. During the trail’s development, legitimate concerns were raised about the encroachment of accommodation and other recreational infrastructure into pristine areas. Matt Ruchel, the executive director of the Victorian National Parks Association, said that the original plans for several huts and more high-end accommodation along the trail had been revised, with most now focused in existing town centres. The trail itself features small huts at two of the 11 bookable campsites, which minimises its intrusion into unique areas.

Some walkers suggest that site fees of $47.70 per night will rule out financially disadvantaged hikers, but Parks Victoria chair, John Pandazopoulos, says it’s an appropriate rate, considering the cost of maintaining the track and servicing the campsites. Over 1400 reservations have already been made. Many walkers may prefer to tackle shorter sections of the trail; some sections can be done as free day walks.

The trail extends over the ancestral lands of the Djab Wurrung and Jadawadjali people. Parks Victoria worked with traditional owners to guide the trail alignment and shape visitor information and stories. More trail information from Parks Victoria can be found HERE.