Walking the Kokoda Trail – Courage, Endurance, Tenacity – The preparation and experience of a new bushwalker 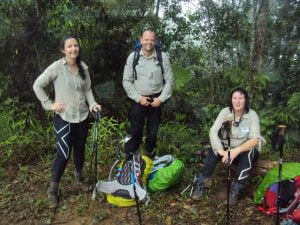 Liz Thompson, a member of the Melton Bushwalkers, walked the Kokoda Trek in July 2019. She shares her experience below.

My Kokoda experience started six months before I left. The ticket was booked by my sister who lives interstate and wanted to do the trek for her 50th birthday. I had six months to start training and I had no real bushwalking/hiking experience apart from a few weekend walks at the You Yangs.  I had never really walked further than 5 km at a time. So the thought of 110 km in 9 days was a bit daunting but it motivated me to get cracking on the training. I had recently moved to Bacchus Marsh so I had the Lerderderg Forrest and Werribee Gorge at my doorstep. I looked up bushwalking groups on Facebook and that’s where came across the Melton Bushwalkers. I went on a few walks with them and met lots of wonderful people, I talked about my mission and a few members decided they would help me train in more challenging elevation outside of the regular group walks.   So every Sunday, we went out for hours on end in the winter chill, climbing steep hills, getting a great workout all the while having great conversations.

Fast forward 6 months later, I land in Papua New Guinea (PNG). It is hot and unbelievably humid for a Melbourne girl. The 25 walkers on our trek meet at the airport. Our trek leader, Major Scott Babington, herded us into an old bus headed for our accommodation before the trek starts the next morning. One thing to mention is the poverty that can be seen in Port Moresby. As soon as you leave the airport you can see the harsh conditions the locals live in. It was an eye-opening experience. Below is a short diary of each of the 9 days.

Day 1:  We take the short 10 km drive to our starting point and meet our porters. These are men from the local villages who help carry some of our belongings.   The weight is restricted to 12kgs, allowing for them to also carry their own stuff and not exceed the 18kgs limit imposed by our trekking company. Excitedly we all start the steep descent into the jungle. The temperature was around 28, it was humid but bearable. It was a short walk today, including a big river crossing then into camp and as soon as we arrived it started to rain. Everyone was in good spirits and happy to get to know each other. We get acquainted with our tents for the first time. 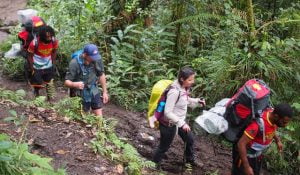 Day 2:  The hills started. This is what I had been training for. The jungle was so beautiful, the twisted roots made natural staircases up the hills. The tree canopy kept the temperature down and whilst there was a little mud, it was OK. Even though the uphill was hard, sometimes the steep descents were more challenging. We reached camp after an 11-hour day, still high on the adrenaline of being here. Our fabulous trek leader gave in-depth talks at various stages on the history and significance of the areas we were walking on.  That night, before dinner, however, I didn’t feel well. I was physically sick. I tried to eat something and then went to bed only to wake up and be sick again. Oh no…. 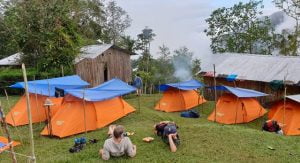 Day 3:   Described as one of the hardest days on the trek due to some of the sheer elevation of one mountain which was aptly named The Wall, I woke up, still unwell, dizzy, racing heart and nausea and wondering how exactly was I going to get through this. I missed breakfast and got straight into the 5.30 am start but 100 metres in I knew I was in trouble. While the other trekkers were ascending the first hill, I spoke to the trek leader and told him I was done. I felt so horrible, I couldn’t even fathom walking up a hill. Reluctantly he made the phone call for a medical evacuation. Turns out, at that time of the morning, no one answers their phone. I took an anti-nausea pill and after some tears, I actually felt a bit better and Scott said he would carry my backpack while I recovered, and reassess my condition up further … so I kept going. We reached the group that was waiting at the top of the first hill and three army reserve guys who were on our trek immediately stepped up and said they will take it in turns to help carry my backpack …. so I continued. I made it up “The Wall” and “Wall 2.0” and all the way to the next camp 12 hours later. It poured rain all day, everyone was wet through, muddy and exhausted. It was one of the hardest days in my life and a day I will always remember. Not because of the bad, because of the way everyone in the group helped me out, kept my morale up and got me through. 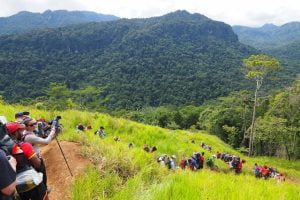 Day 4:  Feeling slightly better, I had assistance with my bag again today. Another gruelling climb and hard day but getting it done. One of the highlights of the Kokoda trail is going through the villages on the way. The kids all come out and wave and smile and say hello. At some villages, they sell treats like cans of soft drink, small packets of Twistee’s and local fruit like bananas, pawpaw or coconuts. It rained on and off all day but we had bouts of the sun to dry us off. 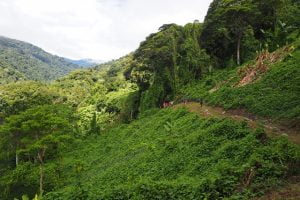 Day 5: There are many places of interest along the trail but some that have more significance than others. Today was a highlight as we made it to Brigade Hill, an impressive mountain ridge that is roughly halfway through the trek. The spot saw a great battle in September 1942 as the Australians tried to hold the advancing Japanese. We had a short ceremony here and paid respect to the soldiers who lost their lives on this battleground. Another thing that became a staple on the trek were river crossings – sometimes we had a fallen tree to cross on, and some we had to walk through waist-deep. 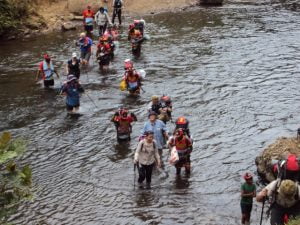 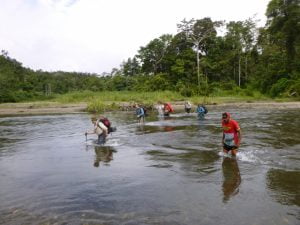 Day 6 – 7: By now everyone has settled into a routine. It was hard at first trying to pack up your gear every morning in a tent but by day 6 I have finally worked out some tricks. One interesting thing, you rarely see any animals in the jungle. You might be lucky to see the odd bird and a few mozzies but I was surprised that there were no animals around. There is also very little colour, just the brown ground and green trees. There were a few fungi around but not many flowers. Occasionally the trail would lead to an open space on the side of a mountain but for the most part, we are in under the canopy of the trees. When there was a view, sometimes you couldn’t see it because of the cloud cover. 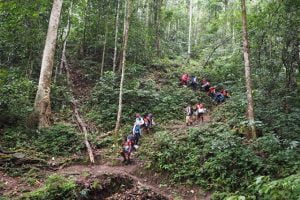 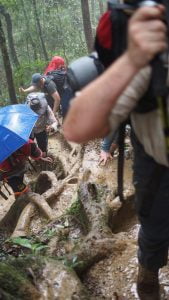 Day 8 – By far my favourite day as we had an amazing dawn service at the Isurava Memorial. A beautiful memorial,  literally in the middle of the jungle.  I later discovered the memorial materials were brought in by helicopter. Four huge granite stones, each inscribed with a single word – Courage, Endurance, Mateship, Sacrifice. The significance of getting here and hearing the letters written by soldiers and poems after we had walked in their footsteps was amazing. We understood what those 4 inscribed words really meant as we were nearly at the end of our journey. From here we started a descent into Kokoda for our final night. 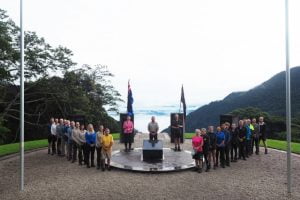 Day 9 – It was a different atmosphere waking up today. We were no longer in the jungle and we had a short walk to the airfield. On the way, we were treated to a baked breakfast and cultural show before heading to the airfield. The airport consisted of a concrete slab with a tin roof and a lady with a clipboard who weighed our bags and us and wrote it all down in her book. After less than an hour’s flight in a small plane, we were back in Port Moresby. On the way back to the lodge we visited the Bomana cemetery where over 4500 Australians lie buried. It is hard to look at all the headstones, mainly young and ill-prepared boys 18 to 20 years old. It was a very emotional experience having walked through the jungle, and to know what they had to endure and the conditions that they would have had no time to prepare for. 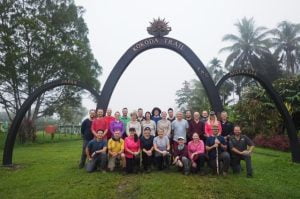 Upon reflection of my time at Kokoda, it’s hard to put into words the profound effect that experience has on you. It’s not just a journey you take for a physical challenge even though it is physically very challenging. It was also a very mentally challenging experience of having to push through when you think you can’t walk up to another hill, and the emotional journey, the empathy you have for those soldiers who did the same trek but in much worse and harsher conditions. It certainly piqued my interest in finding out more about Australia’s role in WW2. The amazing people you meet and bond with over a very unique experience I would highly recommend.