A Hundred Years of Walking! 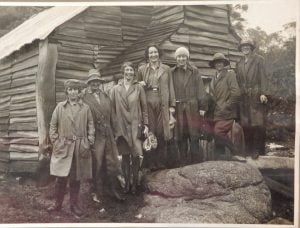 Members of Melbourne Women’s Walking Club (MWWC) are celebrating an extraordinary milestone: the club’s centenary. Back in 1922, Melbourne’s sole walking club was men-only, so a group of enterprising young women founded their own club. From the start, the members enjoyed day and weekend walks and longer tours – wherever railways, packhorses, furniture vans or charabancs could take them. 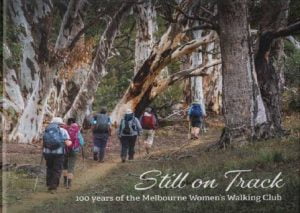 How things have changed over 100 years! In the early days, club members were hampered by walking in long skirts. Their dress changed to short skirts, then riding breeches (the only acceptable form of trousers for women at that time) until, in the 1930s, they defied all conventions by wearing specially tailored shorts. Today, MWWC is still an active club for women walkers of all ages and abilities.

To mark the centenary, a range of special events have been organised, including a ‘no pants’ picnic and a series of walks that have particular historical significance to the club. A book – Still on Track: 100 years of the Melbourne Women’s Walking Club – has recently been launched and can be ordered HERE.  Including photos and descriptions of the adventures experienced by its trail-blazing members, the book chronicles each decade of the club’s history and captures how much has changed. Here’s to another century of walking for MWWC.