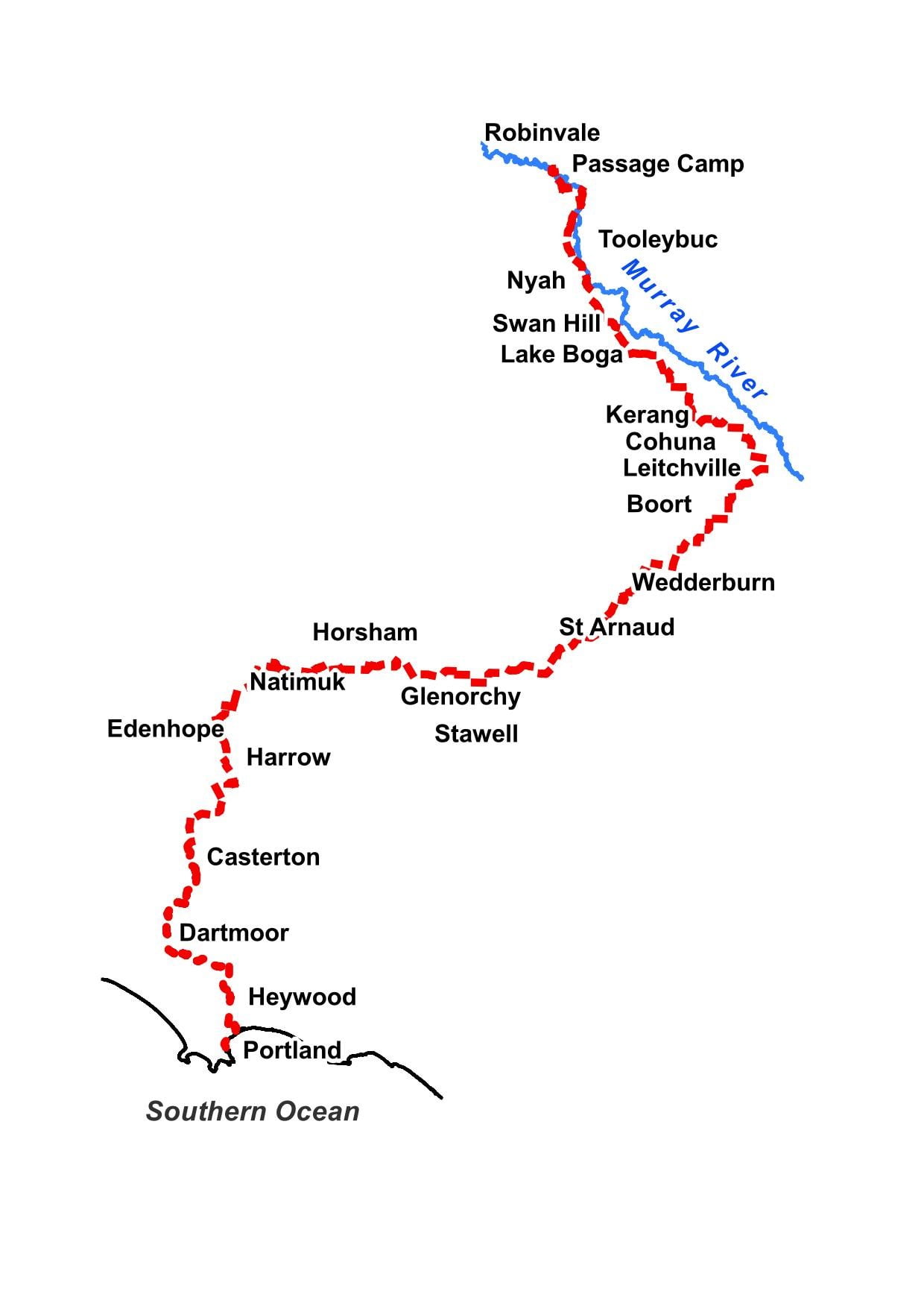 It all began with a suggestion by a club member as Essendon Bushwalking Club members sat in the Star Hotel in Yackandandah in September 2016. They were celebrating the finish of the 635km Goldrush Walk which had kept them busy since they left Geelong in early December 2010.

“What should they do now?” was the question. Were these walkers mad, leader Bill Casey thought? After all the physical and psychological blood, sweat and tears they had endured on the Bay to Border (2002-2006), Melbourne to the Murray (2008-2016) and Goldrush Walks, not to mention twenty years of annual marathon walks (42km per day), surely it was time to back off a little and be happy with simple 10 to15 km day walks.

How far was it? How long would it take? Would enough walkers be interested?

In early 2017, armed with “The Major Mitchell Trail” guide published in 1990 by DCE (the predecessor of DELWP), together with copies of Mitchell’s own maps and notes, Bill and partner-in-crime Sue headed for Passage Camp on the Murray a few kilometres downstream from its junction with the Murrumbidgee. This was where Mitchell had crossed into what is now Victoria on 13 June 1836.

They spent a week exploring mainly by car the walking route possibilities from there to south-west of St Arnaud. Apart from a few worrying moments on the rough and muddy vehicle tracks along the Murray River flood plains, the driving was easy, and they were able to drive and explore long distances in short time. Following Mitchell’s track closely would sometimes involve sections of busy highway walking, so where possible they would seek nearby back roads.

A plan evolved to spend 5 consecutive days on the walk, 3 times a year, aiming to cover 90-100km each trip. The fifth day was effectively half a day, leaving the afternoon for travel home, so an average day’s walk was about 20km.

The next task was to select accommodation places for each stage. For stage 1 they discovered a little-known place called Tooleybuc, just across the Murray in NSW, part way along the stage 1 route. Subsequent accommodation spots for the first half of the walk were Swan Hill, Kerang, Boort and St Arnaud.

So the first five stages came and went between August 2017 and May 2019. Distance covered so far was 420km.

Some highlights of this first section were the Murray River, the inland lakes in the Swan Hill and Kerang areas, and the side-trip ascents of Mt Hope and Pyramid Hill, just as Major Mitchell had done. Did someone say the main highlight was the vanilla slices at the Leitchville bakery?

Next exploratory trip was to Horsham to work out a route from St Arnaud to Portland. The relatively flat terrain continued to Harrow, but then they found the deep river valleys which were encountered southwards to Dartmoor, meaning that the walkers would have to work a little harder. Accommodation venues were chosen: Stawell, Horsham, Edenhope, Casterton and Portland.

Stages 6 and 7 went without any major problems and included a side-trip to Mt Arapiles, but then COVID appeared. The caravan park at Edenhope must have been sick of us booking and then cancelling. On the third try in March 2021 they finally completed stage 8, and looked forward to plain sailing on to Portland. However, this was not to be as halfway through stage 9 in May 2021 they were forced to abandon and return home as John had visited a COVID “hot spot” a few days before coming to Casterton.

Further lock-downs meant that they were unable to complete stage 9 (renumbered stage 10) until May 2022. To avoid long walks on the busy Princes Highway between Dartmoor and Heywood, they had to engage in lengthy correspondence with VicTrack and a plantation manager before theywere able to walk through their lands.

The final stage 11 to Portland took place in August 2022. They had planned to keep away from the Princes Highway as much as possible, but flooded and closed minor roads forced us to “run the gauntlet” in single file and in our hi-vis vests – a not pleasant experience.

Highlights/lowlights of the second half included the pleasant walking beside the Wimmera River, the arduous stretches of deep soft sand in hot conditions in Tooan State Park and Konnepra State Forest near Miga Lake, historic Harrow township, many electric and barbed wire fences which had to be negotiated in the old railway reserve near Dartmoor, the “koala epidemic” north of Portland (as it was described by a local farmer), and the final pouring of Murray River water into Portland Bay. They then enjoyed a farewell dinner at Portland’s Royal Hotel. 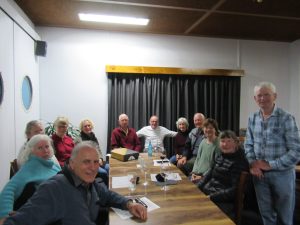